You are here: Home / Book News / Here are all of the IDW Comic Books to be Published This Summer IDW has just posted their entire summer release for their graphic novels and digital comics. With world-renowned brands like Sonic The Hedgehog and Transformers, groundbreaking original series like Usagi Yojimbo and Sleeping Beauties, acclaimed celebrations of the comics medium like Dave Cockrum’s X-Men Artifact Edition and Parker: The Martini Edition – Last Call, and everything in-between, IDW is perfectly poised to bring readers the summertime thrills they’ve been longing for.
It’s been a crazy time for everybody,” says John Barber, Editor in Chief at IDW. “I’m really excited about finally bringing people the thing that brings us together: comics and books. There’s a really wide range of comics and graphic novels coming from IDW this summer — some you’ve probably been waiting for, and some that are new surprises. For me, the real magic is that there are stories here for everyone, from every walk of life.”

Chris Ryall, IDW’s President, Publisher, and CCO, says, “We’ve all been waiting — fans, retailers, and our staff alike — fervently and sometimes with a bit of understandable restlessness. Our thanks go out to all of you for letting us continue to make, ship, and sell comics to you. None of us take that opportunity for granted – and we will all continue to strive to make any purchase you make worth your time and your money.”

Camp Spirit Graphic Novel
Revisit the summer of ‘94 with writer/artist Axelle Lenoir! With just two months left before college, Elodie is forced to take a job as a camp counselor. She doesn’t know the first thing about nature, or sports, or kids for that matter, and isn’t especially interested in learning… but now she’s responsible for a foul-mouthed horde of girls who just might win her over. Just as Elodie starts getting used to her new environment, a dark mystery lurking around the camp begins to haunt her dreams.

Sonic The Hedgehog: Tangle & Whisper Vol. 1 Trade Paperback
Join two of the most popular new characters from Sonic’s world in this classic odd-couple team-up adventure! Tangle the Lemur’s got a problem: there’s not enough action in her life! Whisper the Wolf’s also got a problem: she’s hunting down an incredibly dangerous enemy named Sonic the Hedgehog! Can Tangle and Whisper help solve each other’s problems, or will they just make things worse? By Ian Flynn, Evan Stanley, and more!

Teenage Mutant Ninja Turtles: The Road to 100 Deluxe Edition Hardcover
The landmark 100th issue of Teenage Mutant Ninja Turtles gets the celebration it deserves in this special hardcover edition! Nearly eight years of action-packed continuity by TMNT co-creator Kevin Eastman and series co-writer Tom Waltz is brought to its dramatic finale… but that’s not all!  In addition to the landmark issue, join TMNT scholar Patrick Ehlers for an authoritative study of IDW’s TMNT continuity — the perfect companion for such a notable comic book milestone! 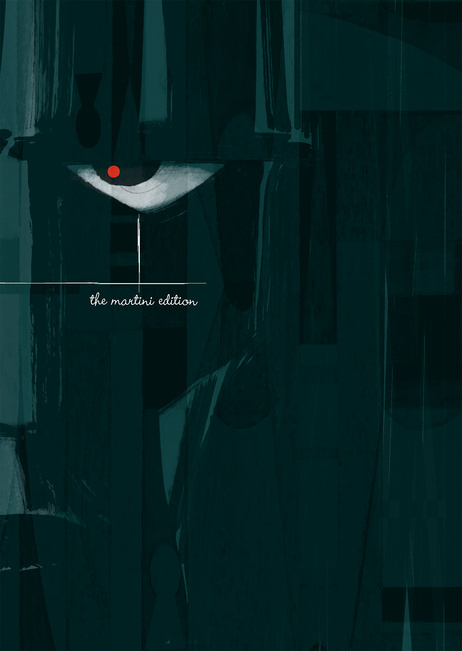 Parker: The Martini Edition Hardcover Slipcase Graphic Novel
The great Darwyn Cooke’s graphic novel adaptations of Richard Stark’s Parker stories “The Hunter”, “The Outfit”, “The Man with the Getaway Face”, and “The Seventh” are collected in this 9” x 13” hardcover, packaged in a gorgeous slipcase. Includes copious illustrations by Cooke and a long form discussion on Parker featuring Cooke, Ed Brubaker (acclaimed writer of Criminal), and noted comics journalist and historian Tom Spurgeon. A loving tribute to the legacy of Darwyn Cooke and Parker!

Usagi Yojimbo Vol. 1: Bunraku & Other Stories Trade Paperback
The warrior’s journey of Usagi Yojimbo continues in these all-new full-color adventures! In “Bunraku & Other Stories”, Usagi becomes embroiled in a puppet drama where the players are not quite what they seem, goes back to his bodyguard roots on a perilous journey alongside Lady Mura, and hunts a stolen sword with bounty hunters Gen and Stray Dog. Plus, the very first Usagi story, “The Goblin of Adachigahara”, is expanded from 8 to 24 pages, adding new insights into the characters!

Dave Cockrum’s X-Men Artifact Edition Hardcover
After the runaway success of Giant Size X-Men #1, all-new stories exploded in the pages of X-Men #94… and the rest is the stuff comic book dreams are made of! This Artifact Edition contains more than 100 pages from Cockrum’s initial run on X-Men, as well as pages from the artist’s second run on the characters several years later. As an added bonus: a gallery section featuring covers, sketches, and a few surprises! This is an art book made for fans of Dave Cockrum’s X-Men art!

Sleeping Beauties #1 (of 10)
Based on the horror novel by Stephen and Owen King, and adapted by Rio Youers and Alison Sampson! A strange sleeping sickness, known as Aurora, has fallen over the world, and strangest of all, it only affects women. In the small town of Dooling, a mysterious woman has walked out of the woods; she calls herself Eve and leaves a trail of carnage behind her. More mysterious: she’s the only woman not falling asleep.

Snake Eyes: Deadgame #1
Comics superstar Rob Liefeld (New Mutants, X-Force, Youngblood) takes on G.I. Joe in this high-octane, adrenaline-fueled miniseries! Snake Eyes has long been the most mysterious member of the G.I. Joe team, but within the pages of Deadgame, he’ll finally be forced to play his hand! How long can he keep his past classified… and what deadly secrets will come back to haunt him?

Star Trek: Deep Space Nine – Too Long a Sacrifice #1
Death casts its shadow as Constable Odo searches for truth amid a web of treachery and lies. Everyone on the Promanade has a motive for this murder, be it vengeance, justice… or old-fashioned greed. Legendary Star Trek scribes Scott Tipton and David Tipton team with noir artist Greg Scott for the first Deep Space Nine comic book series in a decade!

Transformers ‘84: Secrets & Lies #1 (of 4)
Simon Furman returns! Accompanied by the equally accomplished Guido Guidi and John-Paul Bove, the beloved writer tells a new tale in the original Transformers comic universe, hot off the heels of the successful Transformers ’84 #0 one-shot! As the Cybertronian Civil War rages, Decepticon scientist Shockwave has encountered a new obstacle to the Decepticon’s victory and subjugation of the planet: an obstacle called Megatron!

My Little Pony / Transformers #1 (of 4)
When Queen Chrysalis casts a spell looking for more changelings, she accidentally interferes with a malfunctioning Spacebridge! What’s this mean for our favorite fillies? There are suddenly a bunch of Autobots and Decepticons in Equestria! And as the dust settles, Rarity and Arcee find themselves teaming up against a hostile Decepticon force… 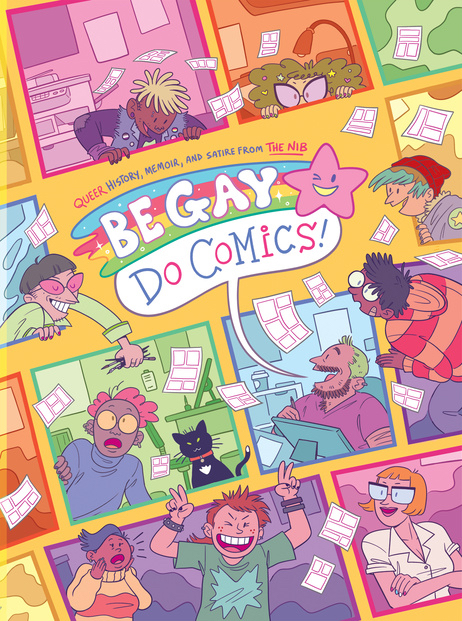 Be Gay, Do Comics Graphic Novel
The dream of a queer separatist town. The life of a gay Jewish Nazi-fighter. A gender reveal party that tears apart reality. These are the just some of the comics you’ll find in this massive anthology from The Nib. Be Gay, Do Comics is filled with dozens of comics about LGBTQIA experiences, ranging from personal stories to queer history to cutting satire about pronoun panic and brands desperate to co-opt pride. Brimming with resilience, inspiration, and humor, featuring more than 30 cartoonists!

Teenage Mutant Ninja Turtles: The Last Ronin #1 (of 5)
Springing from the minds of TMNT co-creators Kevin Eastman and Peter Laird comes an epic like you’ve never seen before! In a far different future NYC, a lone surviving Turtle goes on a seemingly hopeless mission to obtain justice for his fallen family and friends. Kinetic layouts from Eastman, moody inks from Andy Kuhn, and a thrilling script from longtime TMNT scribe Tom Waltz combine to make this one of the most memorable TMNT stories you will ever read. Oversized in both format and page count!

Voyage to the Stars #1 (of 5)
The hit sci-fi comedy podcast crashes into comics! Earth is gone. Only one intrepid crew of misfits managed to escape, now determined and ambiguously destined to stop a growing, ancient evil from consuming the universe (although stopping it may be tricky, as our heroes can’t help but destroy just about every planet and species they come across) By five-time Harvey Award-nominee James Asmus and Connie Daidone!

Canto II: The Hollow Men #1 (of 5)
All-ages fan favorite Canto returns! Once, a little tin slave with a clock for a heart broke all the rules — he escaped his masters on an epic journey to save his love’s heart, and he led his people to freedom. But now that freedom is in jeopardy, as Canto discovers his people’s clockwork hearts will stop unless they return to captivity. He and his friends Falco, Rikta, and Veratta embark on a new adventure to save the lives of all their people. Can they lift the curse before their time runs out?

Locke & Key: …In Pale Battalions Go… #1 (of 2)
Joe Hill and Gabriel Rodríguez’s acclaimed Locke & Key continues! The impossible, reality-bending keys of Keyhouse have always been weapons of war. In the spring of 1915, Chamberlin Locke’s oldest son, John, is desperate to be a part of the greatest war of all… and use the keys to turn the tide! Prepare to open a door onto one of the grimmest battlefields of the 20th century, whose darkness might even strike fear into an army of supernatural shadows.